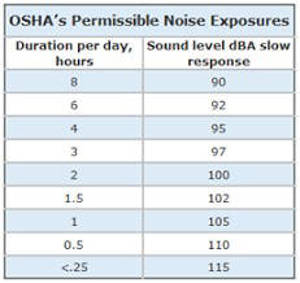 When dealing with cylinders most people are aware of the dangers of pressure. Any time you compress a gas into a rigid container there are hazards of a potential rupture. When filling a cylinder, you have the potential hazards of line ruptures, unsecured cylinders or the concern of over-pressurization. There are other hazards that must be taken into consideration when dealing with high pressure cylinders. When handling cylinders there are times that the cylinder must be drained. Draining a cylinder has its own hazard; excessive noise. Allowing a quantity of compressed gas to escape through a very tiny orifice (valve) creates noise that is nothing less than piercing. The amount of noise can be registered by the number of decibels and exceeding a certain number of decibels can damage the human ear.

Government safety agencies have developed charts warning persons of the amount of noise which can be safely tolerated over a given period. 115 decibels can only be tolerated for a few minutes without causing damage. For reference see the attached charts from different organizations around the world.

No matter which chart or countries rules you choose to follow, 100-115 decibels are the level that most groups agree hearing damage can be caused if listened to beyond just a few minutes. It is also recognized that for every 3 decibels above a threshold, the potential for damage is increased (Johnson, Papadopoulos, Takala – EXPOSURE CRITERIA, OCCUPATIONAL EXPOSURE LEVELS.)

So how loud can escaping gas become, when draining from a cylinder through a valve.  Many factors can influence the decibel level; the pressure within the cylinder, the size of the orifice, the quantity of gas, the size of the room, present insulation, outside noise, the rate of depressurization…. etc…..etc…). I decided to invest in a moderately priced decibel meter with recording capabilities to determine a general number / decibel level while draining compressed air from a cylinder.

To limit my personal exposure to the length of noise I chose a small cylinder (19 cu/ft at a service pressure of 3000 psi / 206 Bar). I then used a standard SCUBA valve with a single small orifice. I did not have the ability to measure the size of the orifice. I would guess that the size of the orifice was similar to other high-pressure devices. The size of the orifice might also match the size of rupture point in a ruptured pressure relief device. Keep in mind, with the data I collected, it would not meet scientific scrutiny. It was done in a general environment, with general conditions, using basic recording techniques. I attempted to simulate similar actions a few times, but not everyone is perfect.

Without a muffling device the Peak decibel reading I obtained were 126 decibels and 127 decibels. However, this peak was only for a second or two before the readings dropped as the pressure was reduced. The longest peak readings were in the 120-decibel range. The ranges between 90 and 127 lasted approximately 2 minutes.

Using a muffling device, the highest decibel range I reached was 120 which quickly (within one second) reduced to 108 decibels. The average decibel level using a muffler was 90 decibels reducing to as low as 70 decibels within 2 minutes.

When draining any cylinder, some type of muffler device should be mandated by the facility. Placing an unmuffled cylinder in another room, only separated by a door, would not be recommended. Placing numerous draining cylinders in the same room for a period of time would also be strongly discouraged. Facilities can supply hearing protection but ensuring that everyone is wearing such protection is difficult.

The best solution is to use a muffling device. That is the only certain way to guarantee that the decibels levels stay within a safe range. When draining a cylinder, use a muffler device for everyone’s safety.